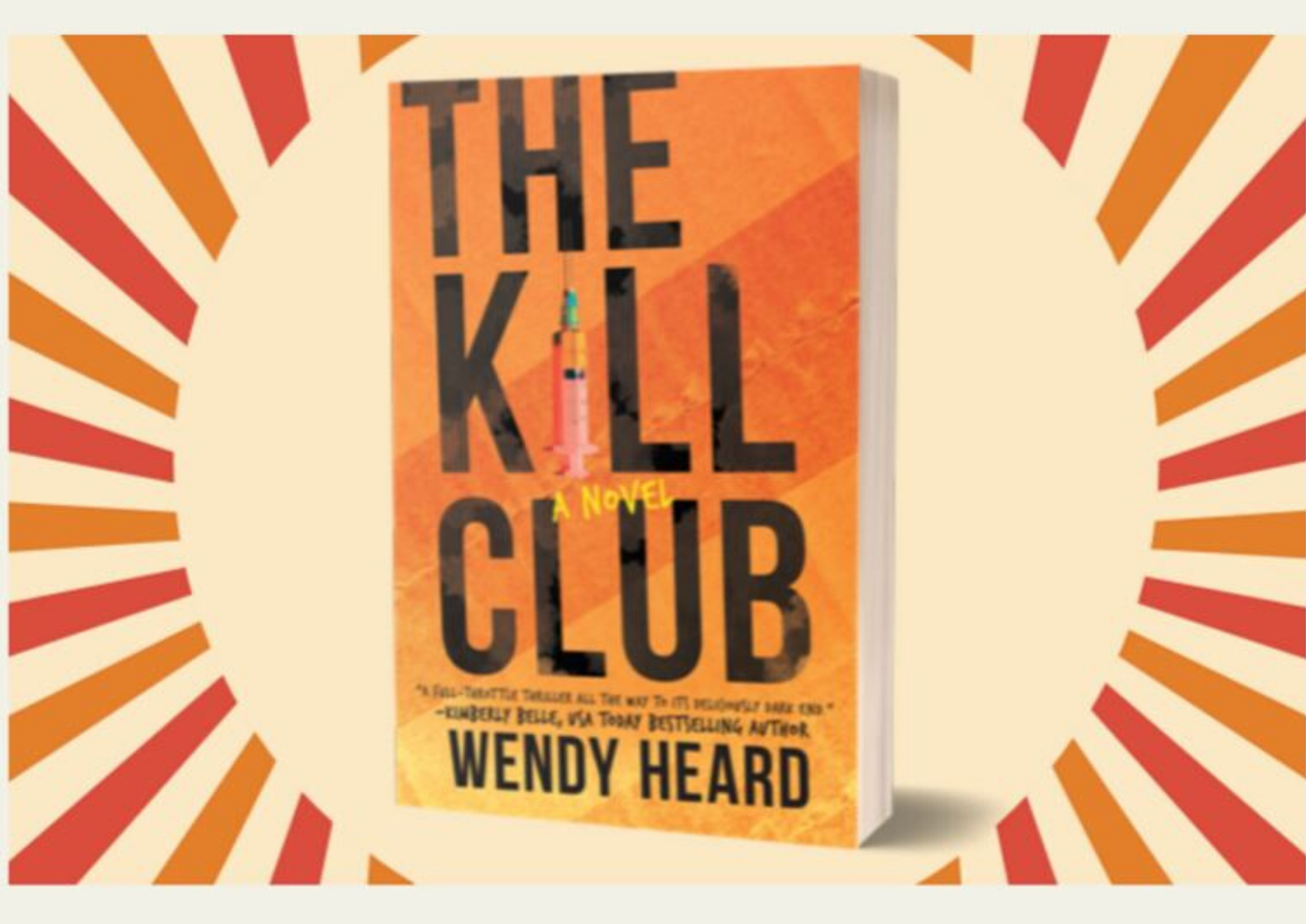 Y’all. This Q&A is to die for. Pun totally intended. Wendy Heard is releasing a new book called The Kill Club (which I’ll be reviewing sometime soon…) on December 17. If the title already drew you in, I can tell you the summary and all of Heard’s answers will just make you even more interested.

Heard is a native Californian. When not writing, she can be found hiking the Griffith Park trails, taking the Metro and then questioning this decision, and haunting local bookstores. She has a few books out/coming soon, so be sure to check them out on her website.

A little bit about The Kill Club…

A haunting thriller about a woman who attempts to save her brother’s life by making a dangerous pact with a network of vigilantes who’ve been hunting down the predators of Los Angeles.

Their foster mother Carol has always been fanatical, but with Jazz grown up and out of the house, Carol takes a dangerous turn that threatens thirteen-year-old Joaquin’s life. Over and over, child services fails to intervene, and Joaquin is running out of time.

Then Jazz gets a blocked call from someone offering a solution. There are others like her, people the law has failed. They’ve formed an underground network of “helpers,” each agreeing to murder the abuser of another. They’re taking back their power and leaving a trail of bodies throughout Los Angeles—dubbed the Blackbird Killings. If Jazz joins them, they’ll take care of Carol for good.

All she has to do is kill a stranger.

Jazz soon learns there’s more to fear than getting caught carrying out her assignment. The leader of the club has a zero tolerance policy for mistakes.

And the punishment for disobeying orders is death.

So intriguing right?? I couldn’t wait to read The Kill Club after getting the summary, and I’m so glad I got to ask Heard a few questions (more like a lot of questions) about the book, her writing process, and some other fun things.

What does the act of writing mean to you?

It means everything to me! I have been writing for a really long time, since childhood. Words and story have always been the way I’ve made sense of things. I’m constantly making up narratives for people and events around me.

Have you ever had a character take over a story, and if so, who was it and why?

Jazz held THE KILL CLUB hostage for months because I couldn’t get her to talk to me! She just kept crossing her arms across her chest and glaring at me. She did NOT want a book written about her, and I really needed her inner monologue for that first person POV! Eventually I started mentally arguing with her, and then in fighting with her and hearing her side, I started to get ALL of her IM. It was an interesting experience, trying to engage with a character in different ways until they cracked open.

Which one of The Kill Club characters was the hardest to write and why?

Sofia. Her story is so much like so many others I’ve known. It’s quietly and invisibly tragic, her pain at the loss of her child so sharp.

Which character in any of your books (The Kill Club or otherwise) is dearest to you and why?

Jazz! By far, Jazz is my favorite character. In my mind, she’s kind of the spirit of Los Angeles. She’s been through so much, and her sense of humor and lack of entitlement gets her through it all. She just continuously makes the best of every hand she’s dealt, moves forward, and doesn’t engage in self-pity.

Do you have stories on the back burner that are just waiting to be written?

Let me get out my banjo. YES. I have so many. I have a YA that’s waiting to be written after I finish this current work in progress, which I’ve stopped and started a bunch of times, really honing the concept to get it just where I want it. But I’m constantly coming up with book ideas and having to tell them “not right now, darlings!”

Do you plan your books in advance or let them develop as you write?

I plan them for a long time before I start writing them, and I’m constantly revising my outline, but the plot and characters do develop quite a bit along the way.

Publishing is not for the faint of heart. For me, the beast is always self-doubt, and in a business that is full of rejection, that can really eat at you. It’s so easy to get out of balance and give our creative projects the power to define us. It’s important for anyone selling their art to remember to nurture a healthy life away from it, because art is a fickle master. It will come and go over your lifetime, and it won’t always be kind. You have to accept the rules of the game, but you don’t have to let the game play you.

What advice would you give budding authors about publishing?

You’ll hear this a thousand times, and you won’t believe it, but: the most important thing is writing a good book, and more than that, the right book. If you let the market and external forces tell you what to create, you’ll resent and blame them when it doesn’t go well. That said, keep an eye on the market, find a way to love something you think can sell, and then put your personal spin on it. No one can tell your story but you.

Prerequisite skills for publishing: The ability to revise without having a tantrum; an interest in book marketing and publicity; professional written communication; the ability to hold your freakout moments and vent them far away from a public or professional setting; an addiction to caffeine. And for God’s sake, if you’ve been working on something for years and it hasn’t sold and you’ve revised it forty times, write a new book.

This is not fair because I have at least seven thousand favorite authors! How about this–here are some crime fiction authors doing some innovative things in the genre. Kellye Garrett, who’s doing sharp-witted, LA-based mysteries and winning a ton of awards. John Vercher, who talks about social issues while keeping it gritty and plotty. Rachel Howzell Hall, an LA native who does these rad investigative mysteries. Tori Eldridge has a recent and very feminist take on the action thriller with her recent The Ninja Daughter, which I highly recommend. Gabino Iglesias’ award-winning Coyote Songs is this incredible genre mashup, part folklore, part horror, all commentary, and I can’t recommend it enough. One more one more. Carmen Machado’s recent In the Dream House. It’s memoir told in all different genres, it’s chilling, engrossing, dense, and fascinating. Did you read Her Body and Other Parties? Just wow.

What did you want to be as a child? Was it an author?

I was torn between the visual arts and writing, and I always vacillated between them. Got a degree in art, and wrote a book, then did my painting degree, then wrote some nonfiction, then got my art teaching credential — trying things on for size. I do wish I still had time for painting. I never intended to abandon it completely in favor of writing books, but there are only so many hours in the day. And I hope to come back to it in a future existence in which I have some spare time. In the meantime, I try to write about artists and art as a means of hanging onto it.

What do you use to inspire you when you get writer’s block?

I dive into the DMs and torture some writing friends, make them brainstorm with me until I feel better and I have a plan. Or I just step away for awhile. I actually have come to trust writer’s block. If I can’t move forward, I need to stop and consider. There’s something wrong, and my brain is trying to get me to stop and gather up the threads. We’re so obsessed with productivity and daily word count, but I actually find I finish books faster when I don’t force myself to write things I know are wrong and waste weeks undoing things.

What book would you take with you to a desert island?

I have a massive volume that contains all the Sherlock Holmes stories in one. I’d take one of those collection type of books. See, it’s technically ONE book.

Tell us about what you’re working on now.

I’m doing a final round of revisions on my 2021 YA thriller, She’s Too Pretty to Burn. It’s loosely based off Dorian Gray and is about a teen photographer who takes a life-altering picture of her introverted girlfriend, sending them into a spiral of fame and danger in an underground San Diego art scene. It has a character who’s basically a fine art Banksy and lots of art crimes.

This post was created in partnership with Harlequin Trade Publishing.