Interview with Aimee Agresti, Author of The Summer Set 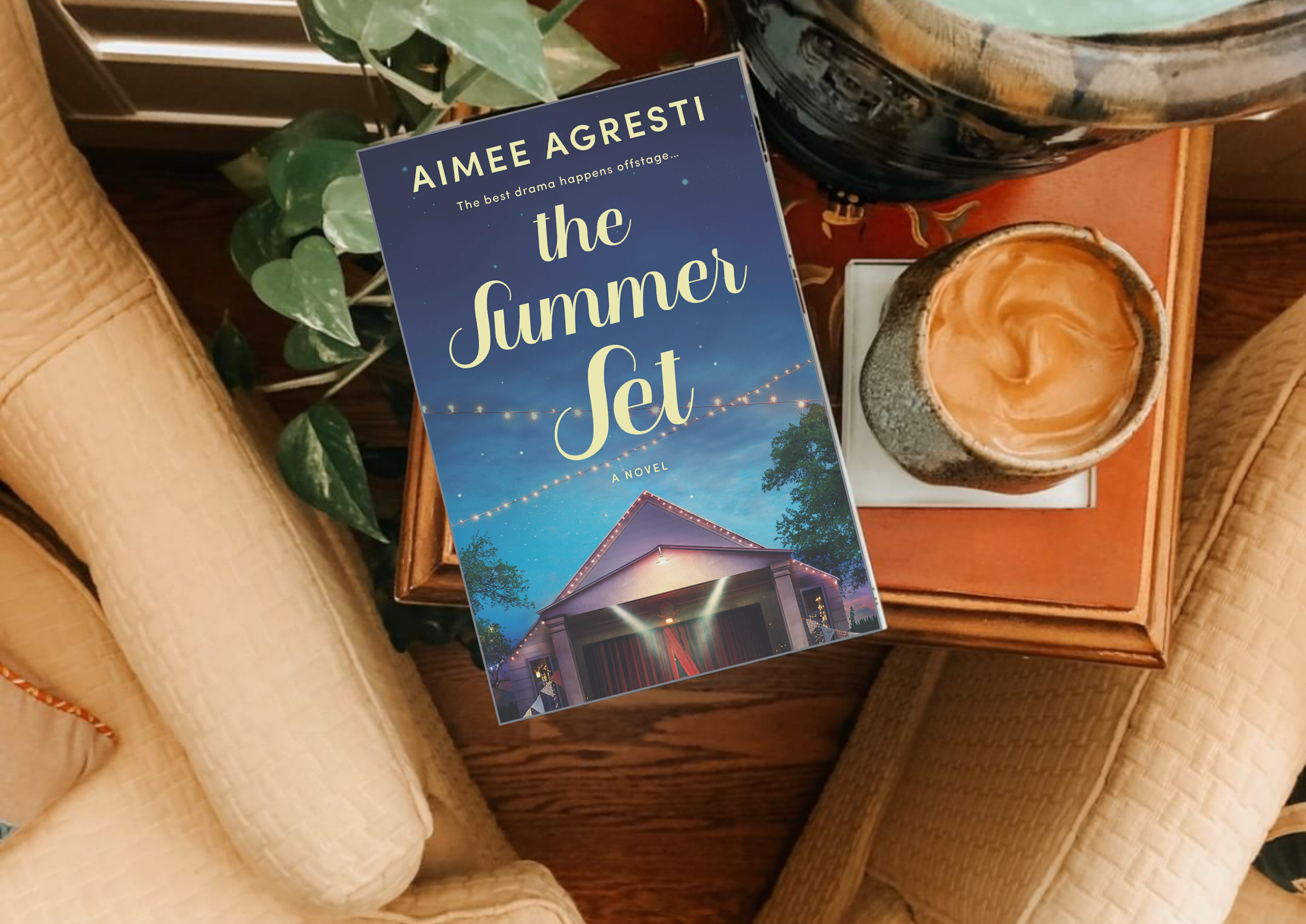 I’m so excited that I get to start the summer off by interviewing the author of The Summer Set, which just came out last week. And let me tell you — it looks like just the perfect rom-com for you to escape with.

If you’ve ever wanted to attend the Shakespeare Festival, or even if you are obsessed with celebrity drama, The Summer Set will be your cup of tea. Seeing as Aimee used to write about celebrities on the daily, I think she knows what she’s talking about.

Read more about the book and the author below!

With a setting inspired by the real-life Williamstown Theatre Festival in the Berkshires where stars like Bradley Cooper, Gwyneth Paltrow, Lauren Graham, and Chris Pine have performed, THE SUMMER SET (Graydon House Books; May 12; Bookshop) is a salacious rom-com, beach read perfect for Broadway nerds and Hollywood gossips alike.

Charlie Savoy was once Hollywood’s hottest A-lister. Now, ten years later, she’s pushing forty, exiled from the film world back at the summer Shakespeare theater in the Berkshires that launched her career—and where her first love, Nick, is the artistic director.

It’s not exactly her first choice. But as parts are cast and rehearsals begin, Charlie is surprised to find herself thriving: bonding with celebrity actors, forging unexpected new friendships, and even reigniting her spark with Nick despite their complicated history.

Until Charlie’s old rival, Hollywood’s current “It Girl,” is brought on set, threatening to undo everything she’s been working towards. As the drama amps up both on the stage and behind the curtains, Charlie must put on one heck of a show to fight for the second chance she deserves in her career and in love.

What’s your elevator pitch for The Summer Set?

The Summer Set is a romp about a former Hollywood It Girl—Charlie Savoy—who flamed out, left the film world and now is almost 40 and back at the summer Shakespeare theater where she got her start as a teen….and where her ex is the artistic director. Drama and hijinks ensue! But it’s really a universal story about old flames, old friends, old rivals and second acts: having the courage to shake up your life!

What inspired you to write The Summer Set?

I’ve always loved the film/TV/theater/music universe. I started out writing for entertainment magazines—Us Weekly, Premiere—and those jobs were incredible and offered me this amazing glimpse into that celebrity world with all of its ups and downs and drama and excitement. I’m an arts girl so I think there’s something magical about the way a great show, whether on stage or screen, can transport you or connect with you or seem to understand you. And I think the people who are able to bring those stories to life are fascinating!

Which came first: the characters or plot line?

They sort of arrived together! This idea has been with me for a long time: I always had Charlie, my main character, and this sense of wanting her to be embarking on a “second act.” I wanted to tell the story of a bold, wild child kind of star who flamed out early and had to start over and figure out what she truly wanted. I always knew this character would be the type who seemed confident to anyone watching but was actually much more vulnerable deep down. Someone who’s acting as much offstage as onstage!

Why do you love Charlie and why should readers root for her?

I really loved writing this character: she’s impulsive and aggressive and tough and uncontrollable. But all of her bravado is covering up how out of place she feels, how nervous she is to be back in the theater world after feeling like she failed in her film career. Anyone who has ever tried to act like they had it all together while actually being unsure on the inside (which I think is all of us, right?!) will understand Charlie and feel she’s a kindred spirit.

As an entertainment writer, you’ve interacted with many celebrities. Who were the most fascinating to talk to?

Oooh, there were so many fun ones: George Clooney is my all-time favorite (he’s EVERYONE’S favorite!) because he’s just a supernice guy and is that type who seems to always be having a great time. Some more of my favorites who also had that same warm spirit and were so much fun to chat with: Sarah Jessica Parker, Angelina Jolie, Renee Zellweger, Ewan McGregor, Hugh Jackman, Hugh Grant, Jeffrey Dean Morgan, the list goes on!

What was your last 5 star read?

I just re-read a favorite–The Lost Vintage by the wonderful Ann Mah! It’s an absolute gem of a novel about love, secrets and drama in French wine country. Beautiful writing, fantastic storytelling and it also satisfies the wanderlust we’re all feeling these days.

What is one thing about publishing you wish someone would have told you?

Oh wow, I feel like even five books in, I’m still learning! But I think one thing I never would’ve expected before I published my first novel is that every time a book comes out you feel that HUGE excitement but also that little rush of nerves, like: “OMG this thing that, for years, only lived in my head and on my laptop is now out there!!! Aaaah!” Or maybe that’s just me? 😉

What inspired you to become a writer?

A love of reading! My mom is a librarian so I grew up reading everything in sight and I’ve just always loved escaping into books. I went to journalism school and worked in magazines, which I absolutely adored, but I always dreamed of writing novels, so I feel incredibly lucky to get to do this!

What was your journey to get your first book published?

Great question! My first novel was Illuminate, the first of my YA Gilded Wings Trilogy. I tend to write the book I most want to read at any given time and I got lucky that when I was in the mood for YA, so were a lot of other people, so that worked out! But I actually wrote another book BEFORE that one—it was a totally different vibe and not YA–that just didn’t hit things right, for whatever reason. I always say that publishing–the fiction world especially–is like falling in love and you need the right person to read the right manuscript on the right day and have the right connection to it in order to get published. I feel very lucky every time a book gets published!

Let’s talk about your writing, what is your writing process like? Do you follow an outline or do you just see where the story leads you?

I’m a major outliner! I need to have everything mapped out. I need to know this journey has a destination. I admire writers who can let things unfold as they go—how freeing that must be!—but I’m a planner, it gives me comfort. Although, there are plenty of twists that only present themselves when you’re in the middle of writing so I do always let myself deviate from my outline too, great stuff comes out of that!

How do you decide what kind of journey you want your characters to go on?

That’s a fantastic, huge question! Those first flashes I always have of a novel are of the main character in some sort of inner turmoil. So I tend to know the reason I’m going to be telling their story in the first place, but figuring out how to show it all and get from point A to B to C, takes a lot of mapping out

Do you share your work along the way or wait until it is complete to have others read?

My sister is my beta reader and she is amazing! Sometimes I’ll give her the book as I’m writing it, as I did with The Summer Set, and other times I’ll wait until it’s all finished (like with my previous novel, Campaign Widows), it mostly depends on how tight the deadline is! She’s incredible and I’m so grateful for her close eye and the time she spends doing this for me. Since she enjoys the same books/films/stories/genres as I do, I know that if there’s something in my novel that isn’t working for her then it’s not going to work for any reader! She’s the best! If you’re reading this: Hi, sis!

What projects are you currently working on?

I’m (slooooowly) at work on the next novel! It’s in those early stages but it’s an idea I’ve had for a long time so I’m excited! Wish me luck!!

Who is your favorite author?

I could never choose just one! I grew up on the classics (Austen, the Brontes, Hemingway, Salinger, on and on!) and I adore them so much and revisit them often like checking in on old friends! As for contemporary authors, I love Tom Perrotta, Nick Hornby, Emma Straub, Dave Eggers, Elizabeth Gilbert, to name a few! There are so many that I love and admire!

What are your top 3 favorite books of all time

Oh man, this is REALLY tough because there are just soooo many. But I’ll go with these:

—Pride and Prejudice: I could read this every day! I’m completely Jane Austen-obsessed so I actually feel that way about all of her books. Even now, I’m thinking: should I choose Emma?! Or Persuasion?! How do you choose?!

—The Catcher in the Rye: I love everything Salinger. But Holden Caulfield was my first literary crush!

—A Moveable Feast: I also love everything Hemingway but I’ll go with this one because I’m pretty sure I belong in Paris in the ‘20s. (Aside from my very bad French.)

Aimee Agresti is the author of Campaign Widows and The Gilded Wings trilogy for young adults. A former staff writer for Us Weekly, she penned the magazine’s coffee table book Inside Hollywood. Aimee’s work has also appeared in People, Premiere, DC magazine, Capitol File, the Washington Post, Washingtonian, the Washington City Paper, Boston magazine, Women’s Health and the New York Observer, and she has made countless TV and radio appearances, dishing about celebrities on the likes of Access Hollywood, Entertainment Tonight, E!, The Insider, Extra, VH1, MSNBC, Fox News Channel and HLN. Aimee graduated from Northwestern University with a degree in journalism and lives with her husband and two sons in the Washington, DC, area.