Interview with Suzanne Park, Author of The Perfect Escape 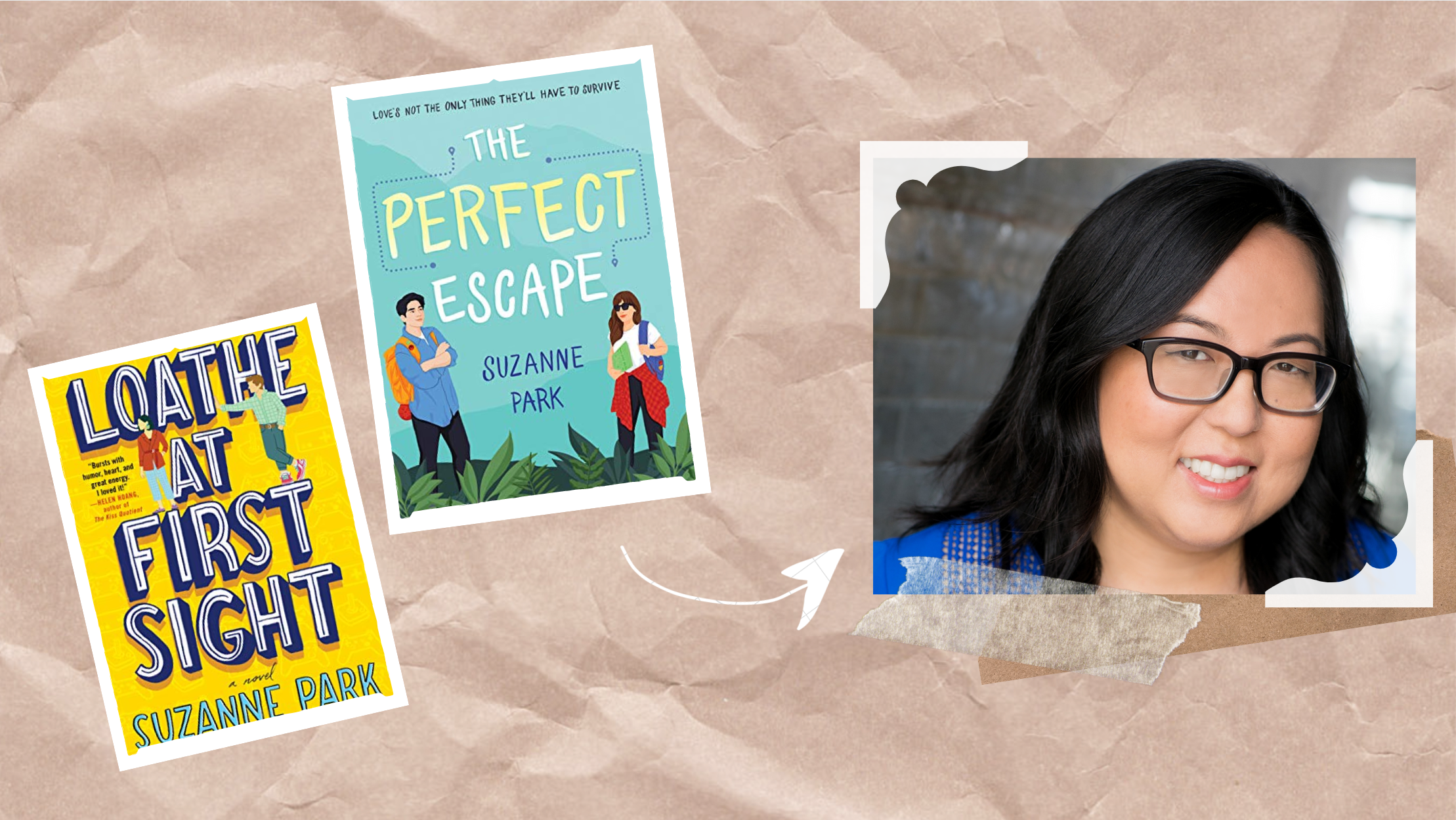 I cannot tell you how excited I was when I got the opportunity to interview Suzanne Park! She’s a Korean-American author — who has TWO #ownvoices debuts coming out in the same year. In TWO different genres. AND in 2020, no less. All of which are quite the accomplishments.

Suzanne, if I didn’t know better I would assume you were one of Kate’s dad’s robots. (Hopefully fellow The Perfect Escape readers enjoy this reference, haha! Everyone else — read the book and revisit!)

Below, you’ll find all sorts of interesting questions and answers about both of Suzanne’s new releases. The Perfect Escape came out earlier this year, and Loathe at First Sight is out this week!

Time to get into the interview!

What inspired you to write The Perfect Escape vs. Loathe at First Sight?

I got the idea for THE PERFECT ESCAPE a couple of years ago, when my brother, sister and I attempted a zombie escape room challenge. According to the host that evening, our team set a record for “dying” the earliest — we didn’t even solve the first clue! The experience was more hilarious than scary, and the host was an energetic guy who really got into the game. He was maybe in his early 20s, and I thought how funny it would be if I wrote him into a book and set a romance right there in the escape room— the most unromantic place in the world. It could be one of the nerdiest meet cutes ever.

I’ve also been obsessed with zombies and apocalypse survival for a while now, and it all started because of THE WALKING DEAD — I’ve seen every episode (and read a few comics). So between my escape room experience and my weird obsession with zombies, plus the fact that I had always wanted to write an #ownvoices book from a Korean-American male main character’s perspective, this book idea fell into place pretty quickly and easily.

For LOATHE AT FIRST SIGHT, I’d initially set out to write a workplace comedy, and I wanted it to be set in the video game industry because I liked gaming and I hadn’t seen much written about it in Contemporary Fiction. When I began researching this book four years ago, it was instantly clear to me that the gaming industry was not fun and games for women, especially for women of color. Sexual harassment and racism was (and is) pervasive and rampant. But recently, there’s been an industry upheaval and I’m hoping my book also helps bring awareness to the behind-the-scenes misogyny in gaming.

I grew up watching screwball romantic comedies from the 90s and early 00s (is that 2000s?) and was heavily influenced by them as I developed and wrote both of these novels. There’s definitely more of an emphasis on the “com” in my rom-coms.

Which came first: the characters or the plot line?

Plot line! It takes me a while to figure out characterization and voice, but when I have a plot in place, it helps me figure out my cast of characters.

What is your writing process like? Are you an outliner or do you just let the story take you where it wants?

It hasn’t been easy to write in these pandemic times. I’ve had to change a lot of things in my life to make this happen, including daily word count, which is 1K words a day. I’m more of a hermit now and pretty sure I need a lot more vitamin D.

The last draft I finished had no outline — only the short pitch I sent to my editor. But the book I’m drafting now I tried to be more of a plotter. I thought to myself, maybe I’ll be more of a planning-type — so I wrote a page-long synopsis. Sadly, I have not stuck to the synopsis in any way. So I think my nature is to just take the story where it wants to go!

If you could describe each of your novels in 6 words, what would they be?

You wrote a young adult sci-fi, tech-zombie book and a women’s fiction rom-com about fighting misogyny that are both out this year. How was the writing process different for those books?

The YA book pulled in elements of things I was already interested in — zombies, AI, and robotics — and things I kind of knew a little about but needed to learn more — martial arts, camping, tasers haha. After knowing what type of book I wanted to write, I had to figure out how the pieces could come together in a fun, compelling way.

The adult book required considerably more research (including interviews) so that the authenticity and accuracy about what it’s like to work in the video game industry was realistic. What I didn’t want was for people to discount the novel because it was fake, thereby dismissing the misogyny in gaming. This took a slightly different writing approach because I had to synthesize all of my research and create scenes and conflict from it.

Out of both of your books, do you have any characters that are closest to your heart?

In THE PERFECT ESCAPE, the character that tugged my heartstrings the most was Nate’s little sister Lucy. One of the biggest changes from the first draft to the finished book was that Nate was originally portrayed as an only child. But as I started editing the book, I felt like a piece of Nate was missing. He lacked a certain emotional depth because he was so money-focused. By giving him a little (kindergartner) sibling, and allowing him to be really sweet with her when his parents weren’t there, and short with her when she Tasmanian-Devil-destroyed all of his stuff, you get to see a deeper side of Nate. I based her on my own daughter, who was that age not so long ago.

Asher, Melody’s officemate in LOATHE AT FIRST SIGHT was so much fun to write, and his personal growth in the book was added in later revisions. Ash and Melody have such a funny, adversarial relationship, and it’s fun to see how things change between them throughout Melody’s professional journey.

What was your last five-star read?

I can’t stop gushing about the historical fiction book PACHINKO by Min Jin Lee, it’s been like a year since I read it and I still talk about it. Other recent books I’ve loved: GIRL GONE VIRAL by Alisha Rai, RECIPE FOR PERSUASION by Sonali Dev, and obsessed with Joshiyn Jackson’s NEVER HAVE I EVER.

What’s a book you bought just for the cover?

Do you have a favorite author?

I have so many favorites. But I’ll go with Mindy Kaling and David Sedaris today — before I started writing novels I wrote a collection of personal essays, and that was entirely because I’d read these two authors’ books and loved them so much. You can probably see their influence in my writing!

What’s one thing about publishing you’ve learned in the last year?

2020 has taught me that you can’t control what happens during your release year, especially if there’s a global pandemic sweeping across the world at the same time. One of the few things that you can control is your writing, so it’s important to always be working on the next project.

You are debuting as an author with two books in the same year – What was that like? And are you breathing in lots of fresh air now? The answer above sums up part of it, I wouldn’t recommend releasing two books in a pandemic if you can help it!

The latter half of 2019 was a tough time for me — I was editing both books and promoting cover reveals and figuring out social media at the same time. This year it’s been difficult promoting and drafting, but I’m finally figuring out what works for me and what doesn’t. The April launch taught me a lot, so for the weeks leading up to the August launch I’ve been doing more self-care and being smarter about time management. When the second book launches, I’m buying another book birthday cake and celebrating all over again. Why? Because I launched two books in a pandemic and that’s a big effing deal! I get two cakes this year, damn it!

What does #ownvoices mean to you?

Going back to the originator of the concept Corinne Duyvis, #ownvoices stories are ones in which the protagonist and the author share a marginalized identity. For me, it’s writing Korean-American main characters with authentic voices.

How would you like to see representation change in the next 5 years? I would love to see more #ownvoices stories and BIPOC authors being published. See more BIPOCs hired in the industry. Have more film and TV picking up #ownvoices stories by BIPOC creators instead of buying film rights for books from white authors who depict BIPOC in offensive, racist ways. And I would love to see more “fair” calibration of reviews of BIPOC books, with reviewers thinking harder about biases, value of story to the world, and expectations. In my former life as a stand-up comedian, audiences and comics were by far more forgiving of white male creators/comics, giving them more leeway with content and were less critical of them. These white male comics had a perceived “average” that was higher because that bar started out higher than a female comic, or an Asian one. I’d love to see this level-setting change in the world of publishing, where “relatability of story/character” isn’t the main criteria for ratings of BIPOC book reviews.

If you could give any advice to #ownvoices authors currently working on their projects, what would it be? I try to write a story that only I can tell. I think that’s worked for me so far so I’d recommend that!

Are there any new books you are currently working on?

Yes! I have two new books coming out next year. They’re #ownvoices YA and adult romcoms and the YA will be releasing in June 2021. The adult one should be fall 2021. Title and cover reveals coming soon!