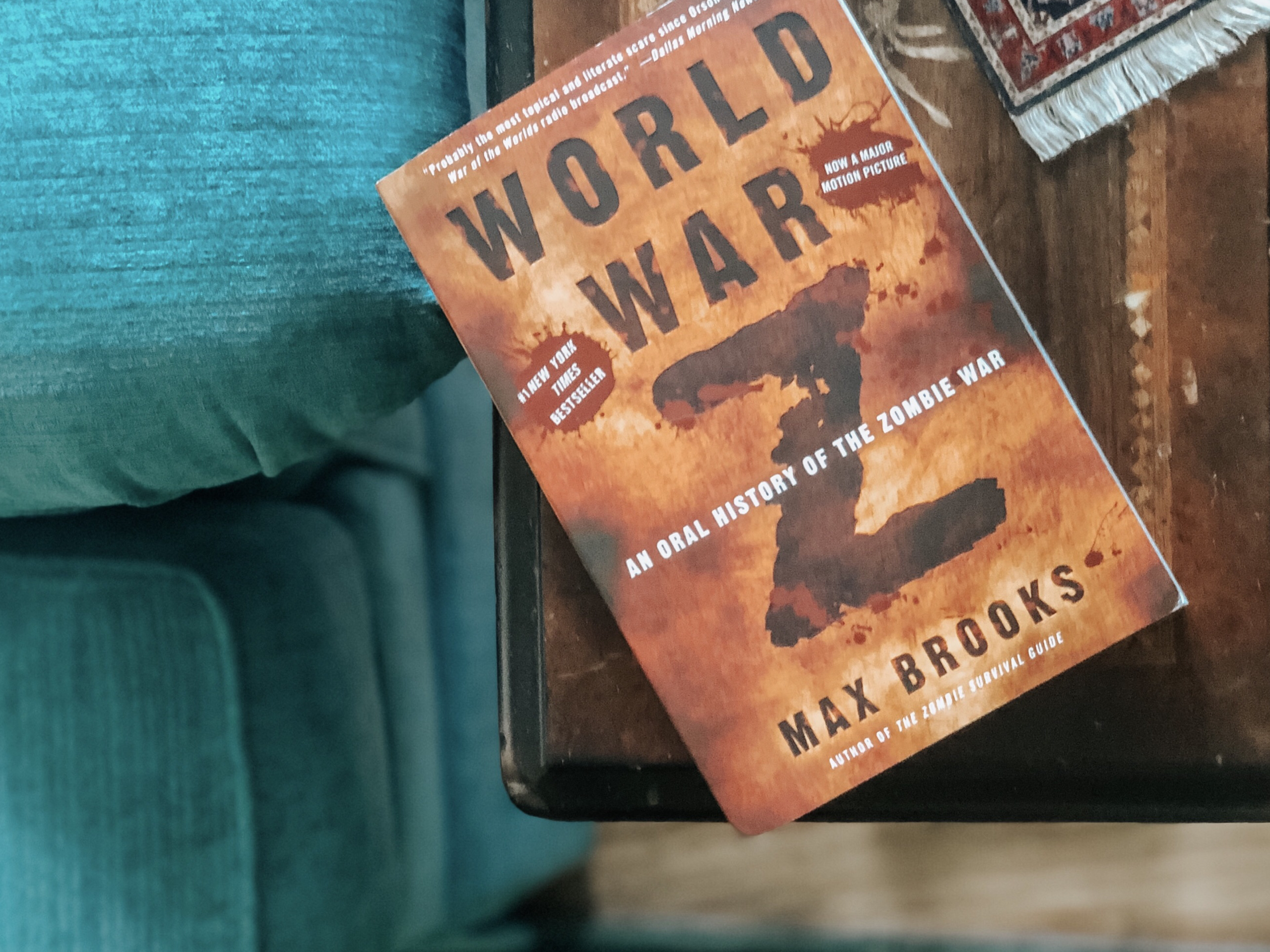 I cannot recommend this book enough! READ WORLD WAR Z. Or listen to it like I did. This is such an interesting book, and it really makes you think about how society and culture would actually respond to something as outrageous as a zombie war.

While this is the only zombie book I have ever read, I’m 99% certain it’s the best one out there. It has amazing, real life stories. There are vignettes that will make you cry, ones that make you cringe, and literally everything in between. So, I hope you like this review and want to chat about World War Z with me. If you do read it/have read it, I would love to hear about your favorite people and stories!

The Zombie War came unthinkably close to eradicating humanity. Max Brooks, driven by the urgency of preserving the acid-etched first-hand experiences of the survivors from those apocalyptic years, traveled across the United States of America and throughout the world, from decimated cities that once teemed with upwards of thirty million souls to the most remote and inhospitable areas of the planet. He recorded the testimony of men, women, and sometimes children who came face-to-face with the living, or at least the undead, hell of that dreadful time. World War Z is the result. Never before have we had access to a document that so powerfully conveys the depth of fear and horror, and also the ineradicable spirit of resistance, that gripped human society through the plague years.

Ranging from the now infamous village of New Dachang in the United Federation of China, where the epidemiological trail began with the twelve-year-old Patient Zero, to the unnamed northern forests where untold numbers sought a terrible and temporary refuge in the cold, to the United States of Southern Africa, where the Redeker Plan provided hope for humanity at an unspeakable price, to the west-of-the-Rockies redoubt where the North American tide finally started to turn, this invaluable chronicle reflects the full scope and duration of the Zombie War.

Most of all, the book captures with haunting immediacy the human dimension of this epochal event. Facing the often raw and vivid nature of these personal accounts requires a degree of courage on the part of the reader, but the effort is invaluable because, as Mr. Brooks says in his introduction, “By excluding the human factor, aren’t we risking the kind of personal detachment from history that may, heaven forbid, lead us one day to repeat it? And in the end, isn’t the human factor the only true difference between us and the enemy we now refer to as ‘the living dead’?”

Wow, wow, wow. This book is incredible. I’ve never read anything that focused on the world-wide influence of a zombie infection, or that did it so incredibly. I love the fact that World War Z is a humanity-driven zombie book. It’s all about how it started, the panic that ensued and the way people took back their countries from the zombies.

It’s so funny to be writing a zombie book review, because I’ve never read one before. But someone recommended this book to me and honestly, my life is changed. It was that good — and that interesting. It’s nothing like The Walking Dead, or any of those other popular zombie movies.

It’s told in vignettes from people across the globe, from the outbreak to the final stand. Max Brooks, the author and the narrator (of the audiobook I read) tells the readers that he was sent out by the UN to gather stories about the war from all over the world. When he comes back with stories about the people, and not just the science, his supervisors tell him to make those stories into a book. That becomes the oral history of the zombie war — from doctors who saw the first cases, the people who predicted the war, and the ones who fought on the front lines.

This isn’t your average zombie story, and it certainly isn’t one where societies become isolated and the zombies take over. It was incredible to see an author who really analyzed how an infection like this would affect humankind and how all the countries would react to it. It shows different cultures, different ways of life, in a way you would never expect from a book about zombies. After reading this I honestly was like wait, a zombie infection is totally actually coming — the sad irony of which is not lost on me.

I listened to the audiobook, which I highly recommend you do. It’s a full cast, and you really get the full illustration of all the different characters, settings, and stories. If you like zombie books, but especially if you aren’t a huge fan, you’ll love this book. Max Brooks gets it right, and it’s obvious he did his research.

Note: I did find out after writing my review that apparently I listened to the abridged version of the audiobook! This is a complete travesty, and while I’m sure my review will remain the same after reading the entire book, I want to make sure you don’t make the same mistake I did!

dystopian Fiction sci-fi
Comments Off
Looking for something?
Oh, hello!