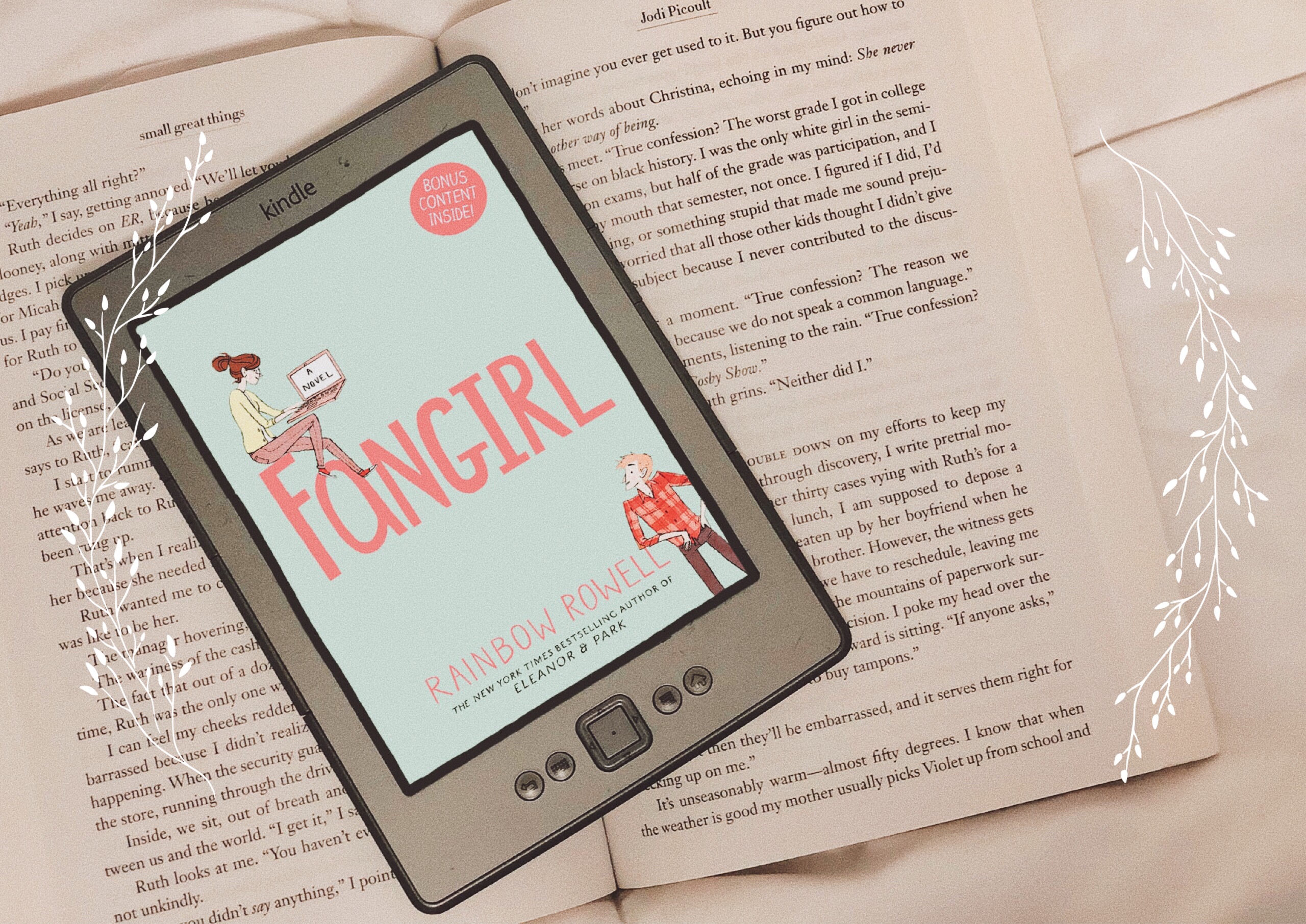 Rainbow Rowell has written so many popular books, I can’t believe it took me this long to read one. I started with Fangirl because I’ve heard so much about Carry On — the book series that spins off from the fanfiction Cath is writing in Fangirl — that I wanted to read its origin story. And I was not disappointed. I loved this book so much. Seriously, if you ever read a YA book, make it this one. (Or anything Rainbow Rowell has written, probably.) Next up, Carry On.

In Rainbow Rowell’s Fangirl, Cath is a Simon Snow fan. Okay, the whole world is a Simon Snow fan, but for Cath, being a fan is her life–and she’s really good at it. She and her twin sister, Wren, ensconced themselves in the Simon Snow series when they were just kids; it’s what got them through their mother leaving.

Reading. Rereading. Hanging out in Simon Snow forums, writing Simon Snow fan fiction, dressing up like the characters for every movie premiere. Cath’s sister has mostly grown away from fandom, but Cath can’t let go. She doesn’t want to.

Now that they’re going to college, Wren has told Cath she doesn’t want to be roommates. Cath is on her own, completely outside of her comfort zone. She’s got a surly roommate with a charming, always-around boyfriend, a fiction-writing professor who thinks fan fiction is the end of the civilized world, a handsome classmate who only wants to talk about words . . . And she can’t stop worrying about her dad, who’s loving and fragile and has never really been alone.

For Cath, the question is: Can she do this?

Can she make it without Wren holding her hand? Is she ready to start living her own life? Writing her own stories?

And does she even want to move on if it means leaving Simon Snow behind?

I have no idea why it took me so long to read this book, because I finished it in two days. I loved, loved, loved it. I’ve been converted into a Simon Snow fan, a Rainbow Rowell fan, an everything-to-do-with-this-book fan.

It is the perfect teen story. It deals with sibling relationships, parent relationships, and everything else the new world of college throws you into. And it is even more fun because of the fanfiction aspect. Cath is writing Simon Snow fanfiction — it’s a fictional series that seems loosely based on Harry Potter — and her world centers around this series and her writing. As a reader, it was so fun to see that fangirling and how it affected her life, especially as she is working on becoming an adult.

It felt similar to a lot of my own college experiences, especially the pressure to do well in class (totally relate as a fellow writing major), and the hope that you’ll find friends and your own way.

She also juggles how to handle her relationship with her father, who is struggling with a mental illness, as well as her changing relationship with her twin sister. Being away from him and the comfortable bubble she had with her sister for the first time is hard for Cath, but she ends up finding her way. And the transition from the girl at the start of the story to the end is amazing, beautiful, and everything in between.

In all, I think this is a great young adult easy read. Since we are coming up on summer, I’ll say that I think this book is a great weekend or beach read, especially if you are headed to college (or even already in college, because I loved it).

It’s fun and it leaves you feeling all the good feelings. Honestly, I don’t understand why it isn’t a movie yet, because it has the perfect make up for a teen hit. If any movie directors happen to be reading this — you know what to do.

“‘I wonder…,” she said, ‘if there was such a thing as time machines, would anyone ever use them to go to the future?'”