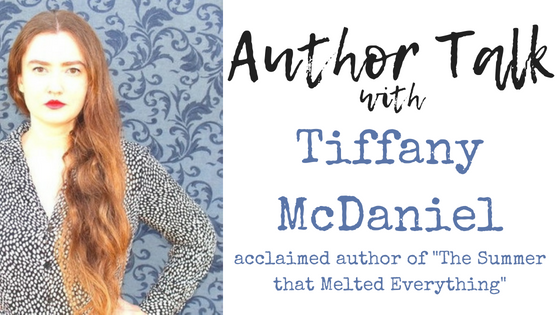 Reading Whale took some time to talk with author Tiffany McDaniel about her novel “The Summer that Melted Everything” and what life as a professional writer is like.

A bit about the author and her novel:

Tiffany McDaniel is an Ohio native whose writing is inspired by the rolling hills and buckeye woods of the land she knows.  Also a poet and artist, she is the winner of The Guardian’s 2016 “Not-the-Booker Prize” and the winner of Ohioana Library Readers’ Choice Award for her debut novel, The Summer that Melted Everything.  The novel was also a Goodreads Choice Award double nominee in both fiction and debut categories, was a nominee for the Lillian Smith Book Award, and a finalist for the Women’s Fiction Writers Association Star Award for Outstanding Debut.

The novel is currently a Target/SkimmReads pick.

Check out my Q&A with Tiffany below for some writer insights and a look into her novel.

Where did your idea for “The Summer that Melted Everything” stem from?

The Summer that Melted Everything started first as a title.  It was one of those hot Ohio summers that I felt like I was melting, so out of true heat, the novel was born.

When did you first realize you wanted to write?

Writing is the first thing I remember doing as a kid without being told to do so.  There was an innate desire to write down what was in my head.  For most of us authors, writing is part of our soul.  It’s what defines us.

Do you believe in writer’s block? If yes, do you have a good suggestion for overcoming it?

I’m very superstitious, so I avoid even saying its name.  But I will say, as long as you listen less to background noise and more to the characters, you’ll be fine.

What is your favorite part of being a writer and published author?

My favorite part is being with the story.  For me, the characters feel like real people, so in their company, I’m very happy.  My favorite part of being published is having the opportunity to cross paths with some amazing folks I’m honored to call readers.

I don’t outline or do character sketches.  I like the story to evolve with each new word and page I write. For me, outlining can be a domestication of the

story, and I like to preserve the story’s wild soul.

Has having a published book influenced the way you write?

The Summer that Melted Everything is my first published novel, but it’s actually my fifth or sixth novel written.  By the time TSTME was published, I already had eight novels written.  It’s best not to be influenced by success or failure.  As long as you write the truth of the characters, then you’re on the right path.

What is the hardest, most grueling part of the publishing process?

The hardest part is getting published itself.  I wrote my first novel when I was 18, and wouldn’t get a publishing contract until eleven years later when I was 29.  It was an eleven-year journey full of lots of rejection, frustration, and heartbreak.  Even now with a book published, there is a struggle to get published again, so it doesn’t get easier.  It’s a career that you have to have lots of determination for.  I would say another hard part of the publishing process is the time it takes.  Even after TSTME was on contract, I waited over two years to see it published, so all told, close to 14 years waiting to see one of my books on the shelf.  You have to have lots of patience in this industry.

Have you read anything that changed how you think about reading, or even writing, fiction?

I haven’t.  I think the best way to hone one’s writing skills is in the belly of the beast.  Which means, actually writing, every day.  Hone your craft by actually doing it.

Do you have any advice for writers currently trying to finish a novel?

Don’t give up.  Like I said before, it took me over a decade to get published.  And if I had given up during that time, I would have nothing to show for that struggle.  There’s only one person who can make your dream of being a published author come true, and that is you.  Trust in the story and trust in your characters.  Allow your characters and their truths to inspire you to finish that novel.

If you are interested in learning more about Tiffany McDaniel, and you want more information on The Summer that Melted Everything, check out her website: www.tiffanymcdaniel.com.