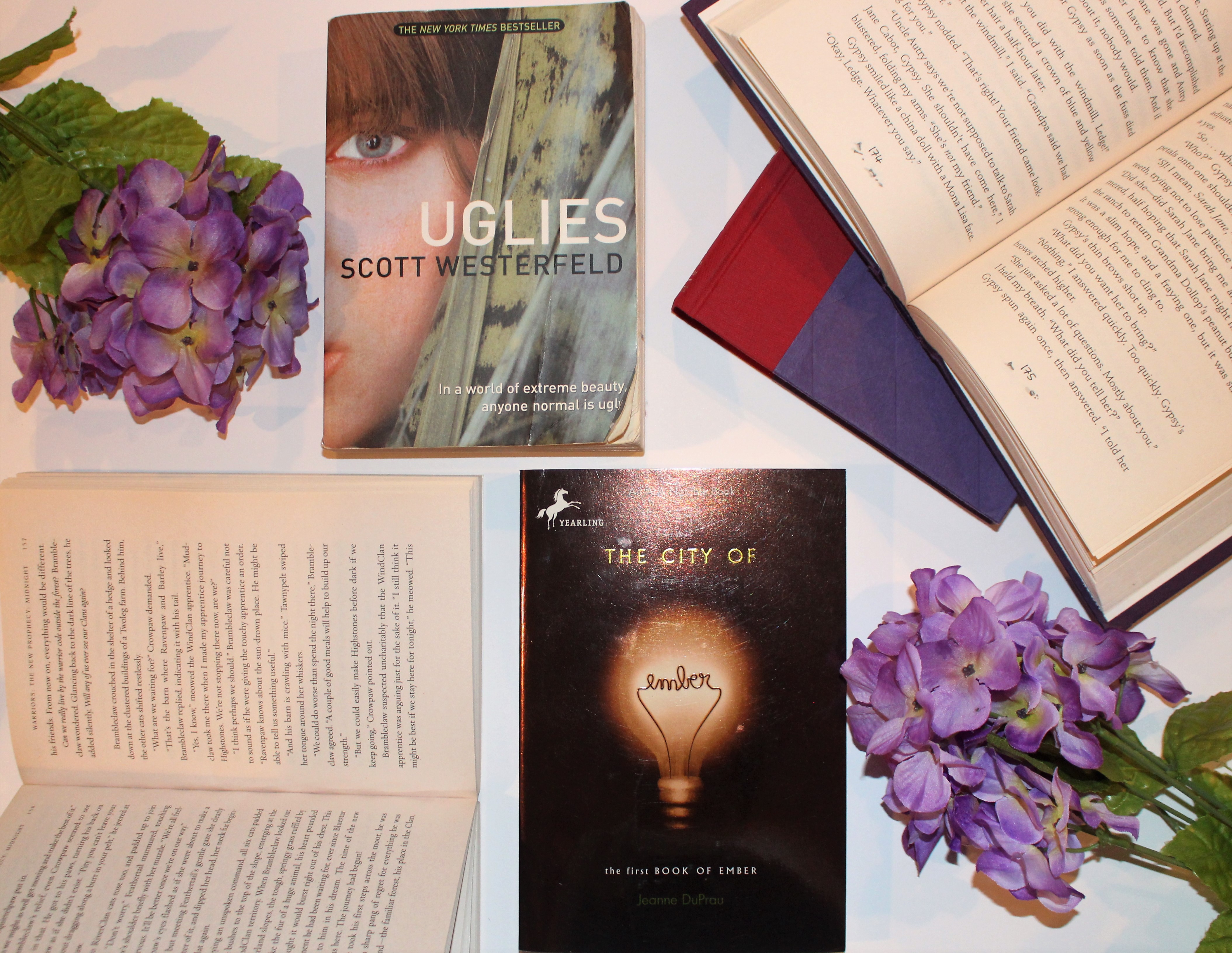 I realize the title of this post might turn a few people off from reading it, but I wanted to write about five series that are great for any child, and even some adults. These are the books I read when I was a child and I believe a lot of them are responsible for my imagination today. So, whether you are looking for a great series to get a kid into, or whether you want to explore some (maybe, partially) lesser known children’s books, read on.

The name of this series is actually a little bit deceiving, but don’t let it deter you from reading the books. This is a dystopian series set in a place where “uglies” are young, unenhanced members of society that haven’t yet had their cosmetic surgery. At 16, they become “pretties” and get to live in the nice city, not the ugly, run-down one. There is a resistance, however, but it is one that is in constant danger because of the government. Tally learns of it, and has to make the decision what to do about it. The books follow Tally’s journey throughout her life as she learns about herself, finds love, knows pain, and more. Calling this a children’s series might be a bit of a stretch, as it is more for young adults, but I believe it is still fitting for middle-schoolers and some elementary-aged kids. I loved this series when I was growing up and I think it is still a great series for kids to read today. It can teach you a lot about what beauty really is and the value of certain things over others. I really recommend you try these books out if you are looking for a new series to read.

Books of Ember by Jeanne DuPrau

These books were all the rage when I was in elementary and middle school, but I don’t know if they still are now. The City of Ember is the first book, and honestly the best way to describe it is as dystopian, but before dystopian was really a genre. The first book follows Lina in the underground city Ember, created to save what their forefathers considered the dying human race. The second book follows their adventure after the first, but the third book goes back in time and tells the reader the true reason the city of Ember was created. The fourth goes back to the original story, which does seem a little redundant. These books were some of my favorite growing up, and still are today. I remember being kept on the edge of my seat as Lina discovered what was happening to the city and how to save it, as they leave it in the second book and learn about the above-ground world. The Books of Ember are really great, especially for kids, though the writing is still advanced enough that adults could read them if they wanted to.

It should come as no surprise that the Harry Potter series made it onto this list. I think as literally the most well-known children’s series of all time it would be an obvious choice. This is the perfect book series for people of all ages, but especially young readers, because it teaches you the value of imagination, of good friends, that there’s always a reason people become evil. Really, it is one of the best series out there. While few people can directly relate to Harry’s story, JK Rowling creates a world that people want to be a part of. The people Harry meets and the adventures he goes on are a great escape from regular, mundane life. It also helps that these books are very long so they are great to keep kids of all ages occupied for a while. I feel like most people already know the back story and whether or not they would want to read Harry Potter, so I will just leave this section off by saying: yes, you should read it if you haven’t already.

I happened upon this series because of my elementary school librarian. She recommended the first book, Savvy, to me and after reading it and loving it, I found out that there was another one. There are now three books and while each can be read as a standalone, they go best together. This series is about a family that receives magical powers on each of their 13th birthdays. Each of the books focuses on a different member of the family with a different struggle. What I love most about this series, though, is the incredible imagination behind it. I read somewhere (maybe in the author bio) that Ingrid Law created this series by thinking of the most ridiculous sentence she could, and then making a story out of it. I think that kind of attitude and approach to story-creating is important for someone who writes children’s fiction to have. I recommend this series for any young reader, and even any curious adult. It is a really fun, engaging story about the importance of family and sticking together.

This series was my favorite as a child. I still vividly remember going to visit my grandmother as I was finishing one of the books and I made my dad stop and find the nearest bookstore so I could get the next one right away. The Warrior series is about groups of wild cats that speak. It might sound a little odd, but these wild cats have clans and they live in the woods, hunting and fighting to survive. In a way, it can teach you a lot about the human impact on the environment because throughout the series the cats have to deal with pollution, losing their homes, all because of logging, fires, human accidents. I completely recommend this series, though not for adults because I imagine it’s too easy of a read for adults. It is great because it is a fun, imaginative read, and there are a lot of books. I believe there are around 36 now, so this series will keep young readers busy for a while.

Do you have a favorite children’s series from when you were young that I didn’t include? I would love to hear about them!